It’s Saturday and that can only mean one thing. It’s match day! So it’s time to don those lucky underpants (the ones you wear every week to watch your team get beat again), get the ironing board out to flatten the crinkles in your football top, and put your scarf on with your team’s colours. A quick wash, bollocks and all, and now you’re ready to meet your mates down the pub for a few pints and a packet of pork scratchings. You’ll talk non-stop about football, football and also football. Then it’s time to head up to the ground. The nerves will be jangling in your belly, the excitement will be rising in you like a small child at Christmas and you will be getting an odd sense of false hope that perhaps your team might actually get a win today. You’ll grab a dodgy pie on the way, before sitting through another soul-destroying ninety minutes of torture. But the love affair never ends.

For football fans everywhere the Corona virus has single-handedly wiped out one of the greatest passions in life. The love affair has, for the time being at least, been put on ice. The ‘beautiful game’ has been suspended indefinitely whilst the virus holds the world to ransom. The last time football was cancelled was in 1939 at the outbreak of the Second World War. In a sense we are at war again. The first leagues to be postponed were in Italy and Spain, the two countries hardest hit by the Corona virus to date. Like dominoes, the rest of the leagues in Europe soon had to make the difficult decision to follow suit. One of the biggest controversies during this time was the fact that 3,000 Atletico Madrid fans, whose league had just been suspended due to fears of spreading the virus, were allowed to get on a plane and travel to England to watch a Champions League match against Liverpool, shortly before the English league was also suspended. Bearing in mind the Spanish capital has one of the highest number of cases of the virus throughout Europe, with hindsight, this should never have been allowed to happen.

In England as the top leagues, for the foreseeable future, closed down for business, some fans turned their attention to the lower leagues for their football fix. Many non-league clubs, whose games had not yet been suspended, reported much higher attendances than normal. Meanwhile, other fans decided to change their sporting allegiances and went to watch a sport with a different shaped ball, rugby. However, it wasn’t long before all sport was suspended and, since that time, fans have been left with no alternative but to watch repeats of all-time classics on Sky Sports and BT Sports. There is no date for when the English League will resume. Indeed the provisional date has been moved further and further into the distant future. The goalposts, as it were, keep getting moved. Scientific reports advise that it could take up to three months before the effects of the virus begin to dissipate. The European Championships, due to be played throughout Europe in the summer, have been cancelled for a year leaving the road clear for league matches to be completed before the next season kicks off towards the end of August.

However, just because the cases of the virus are predicted to fall by June, does not mean that the streets will be free from danger. Extreme caution will have to be followed at all times. The decision as to when it is safe enough to allow people to sit side by side in their thousands inside football stadiums once more will be a difficult one to make. As a result, the Football Association has outlined possible ways to conclude the season. One scenario is to play remaining football matches behind closed doors. This seems like a wise solution as it, at least, allows the season to reach its natural conclusion. Sensibly, they also suggest playing the matches at neutral stadiums. Before the French league was postponed a Paris Saint German match took place behind closed doors at their own stadium and many fans still turned up and congregated in large numbers outside. Playing at a neutral stadium far away would deter similar situations from occurring again. What is imperative is that another scenario, to abandon the season altogether and declare it null and void, does not happen. Simply writing a whole season off would be a tough cross to bear for the league leaders, Liverpool, who have been having a record-breaking season.

Another suggestion that has cropped up is to finish the season now. In this scenario the current league table would be used as the instrument to indicate final league placings. Liverpool would therefore be champions. Nobody could really argue with awarding them the title as they have an insurmountable lead at the top of the table. However, it would be extremely harsh on the bottom three who would stand to be relegated. It is incredibly tight down the bottom and if there was the opportunity for the games to be played there is every possibility that relegation places would change hands, as so often has been the case in the past. And then, of course, there is the problem of who gets promoted. If no further games were to be played, play-off matches could not be contested so promotion would have to be awarded to those teams that currently occupy the top three places. The relegation battle in the Premier League and the play-off contest in the Championship are highlights in any football season and it would be a great shame for all football fans and players if this year these final games do not take place.

Finally, there is also the question of cup competitions. The Champions League and Europa League would be particularly difficult to complete as they involve travelling to other parts of Europe. And the FA Cup, football’s oldest competition in the world, cannot be forgotten about. If games cannot be completed it has been suggested that one possible scenario would be to award the cup to the team who has scored the most goals in the competition so far. The team with that particular honour have had a pitiful record in the cup in recent times. Indeed, they haven’t even managed to progress past the fourth round for 13 years. Furthermore, they have never won anything of note since their glorious Inter City Fairs Cup triumph of 1969, and they haven’t won the FA Cup itself since 1955. That team, drawn at home against the holders Manchester City in the quarter finals, which, incidentally was due to be played today at 7pm, is Newcastle United. And with most of the big boys still in the competition, there is little doubt that Geordies everywhere would give an arm and a leg for this scenario to became a reality!

Every cloud they say, every cloud…..

Also known as the Naked Translator due to the tropical working conditions in his Girona apartment, Chris translates from Spanish to English and specialises in tourism, marketing and football. He is also a copywriter and regularly contributes to the Lucid Eye Blog. When not translating or watching Newcastle United, you can normally find Chris eating ice cream on a beach or climbing mountains in Catalonia with his girlfriend, Vanesa.

Read in your language 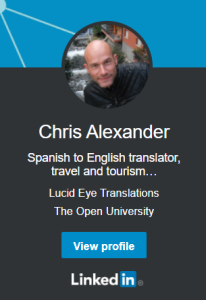